If I used the word fierce I'd use it here.


Is what Sev had to say for her Svob (couldn't resist) in her Interview interview.
Other highlights from the "indie darling's" chat with Sam Bellikoff include Chloe responding to the rumours abounding about her and Pauly D (sparked by Chlo sitting next to the Guido extrordinarre at a Knicks game in Madison Square Garden in January) by saying that, although he was definitely her faviourite of the Seaside Heights hotties, their union would be like "the apocolypse".

On her recent style evolution, Miss. Sevigny disclosed that as a "single young lady" she is "trying to dress hotter". Chloe aims to achieve this by discarding all of her trademark baggy florals for what she refers to as
more "simple, more body-con" pieces.
Inspired by her Janurary Playboy interview maybe? Almost a bizarre a concerpt as her union with Pauly D. Nevertheless she looks smouldering in the accompanying picture

Rocking Brighton
Julian Day’s latest costumier triumph came in the form of British Gangster re-make Brighton Rock. Based on Graham Greene’s famous 1938 crime novel, director Rowan Joffe has updated the story to include the backdrop of the violent 1960’s mod and rocker battles that plagued the beaches of Brighton throughout the decade. Needless to say this chronological shift has allowed for some drastic and fantastic alterations in Brighton Rock’s aesthetic, and Day’s costume design is no exception. 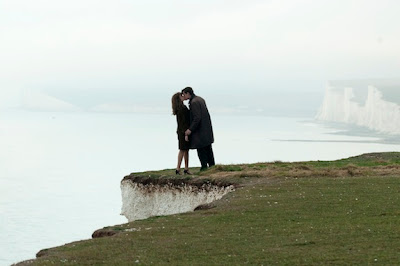 In a similar vein to his flawless costume design in Control, Day refuses to be swept up in the remembered romance of the period. His 1960’s is bleak and cold – and effortlessly reflected in his costume design. Instead of the endless Biba miniskirts and Mary Quant eyelashes donned by the Carnaby Street queen, Rose (the manipulated alibi to Sam Riley’s Pinkie, played by Andrea Riseborough) is seen in much more unassuming ensembles. Her natural-toned hair, paired with longer skirts, button-down cardigans and shapeless coats appear to more accurately resemble the more demure vogue of the popularized late 1950’s and undoubtedly reflects a more gritty aspect of arguably, one of the most romanticised and iconized decades in modern British History. 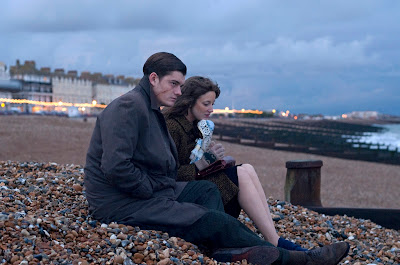 Likewise, Riley’s outfits lack much of the assumed panache and swagger of the 1960’s youth. Unmistakable references to the era are evident from the use of pieces from iconic mod brand Jonathan Smedley, however, Pinkie’s ensembles further show Day’s commitment to presenting 1960’s Brighton in as real and as gritty manner as possible, and one may be forgiven for thinking the clothes belong to decade or two before. 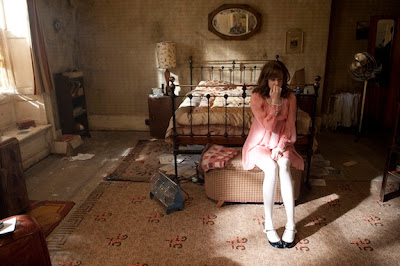 So, if you’re sick of the 1970’s hypocritically opulent hippy or the mid-nineties neon enthusiast who is supposed to provide our sartorial muse this season and fancy coordinating your transition wardrobe to the bleak backdrop of Manchester in mid-February: look no further than Brighton Rock for your inspiration.
For men, the effortless tailoring sported by Riley is a timeless look, and teamed with a skinny tie, button-up cardigans and khaki toned-trench coats; creates a an unmistakable Mod feel. For authentic pieces, try rummaging through boxes of uninspiring smelly cast-off’s in ‘Mr. Ryan’s Famous Second Hand Store’ on Oldham Street for some inexpensive gems, but please wash before wearing. If you lack both the time and commitment to hunter-gather your new look, Gap have a fantastic selection of tailored menswear and Topman offer a reasonable selection of Pinkie-alike shirts and cardigans. 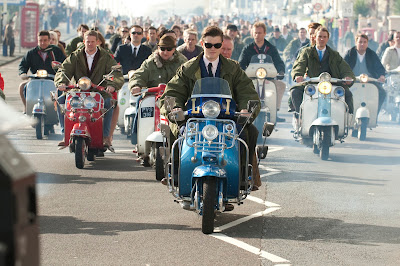 For the girls eager to emulate Rose’s understated gamine appeal, a treasure trove of vintage and second hand pieces can be found in and around Manchester’s Northern Quarter: particularly for boxy handbags, charmingly worn-in Mary Jane’s and the perfect tweed overcoat. The high-street is also awash with simple shift dresses (Topshop have a great selection) and for simply-cut and hard-wearing cardigans head to M&S or Gap. For a terribly unimaginative flourish, why not pick up Topshop’s ‘Brighton Rock’ lipstick and while you’re on your weekly pilgrimage funding Philip Green’s irrepressible empire, pick up a pair of white opaque tights to complete your look. 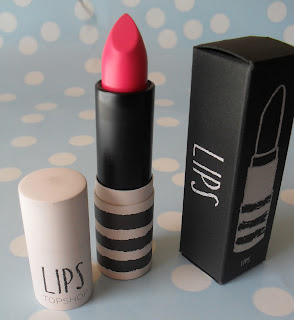 Following In The Footsteps Of Two Very Unlikely Style Icons

I could quite possibly be the least rebellious daughter ever. Never once have I rejected my vegetarian upbringing, have never strayed too far from the non-committal socialistic ideals I was raised with; and last September I smacked the final nail in the coffin of the rebellious, pedantic, persona that never was: I followed my parents to university in Manchester. In fact, the only significant aspect of my life which is diametrically opposed to my beloved ma and pa is my constant preoccupation and borderline obsession with clothes, fashion and pretty much everything associated with the aesthetic. 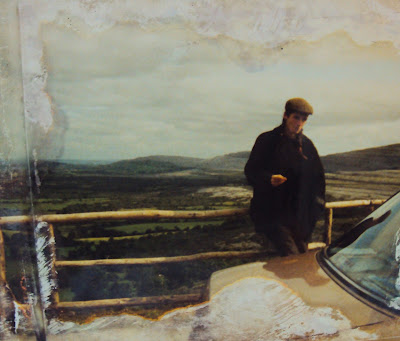 ﻿
From their student stories (including their second year spent squatting in Hulme, starting up a DIY cat sanctuary and ending their degree with a baby daughter) the descriptions never sounded particularly stylish, innovative or even 'cool'. It wasn't until I realised about 30% of my wardrobe is comprised of my father's weather-worn, aran cardigans, old shirts and jackets that I began to appreciate that they once ever had any sense of style. 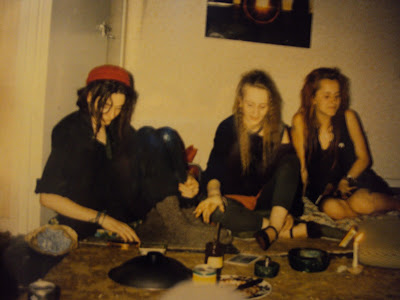 ﻿
More at home these days in a battered welly boots, what remains of his looted jumper collection; with an untamed mane and generally covered in soil: my father bears for resemblance to an Organic Farming Irish Jesus than an alternative fashion renegade. In lieu of this, it was with genuine surprise and appreciation that I looked, with fresh eyes at old photographs of him at University. Sat in front of a Bob Marley poster, with a can of Special Brew on the floor of a familiarly grimy Fallowfield back-to-back, he looks nothing short of a Withnail/Morrissey hybrid: in the most uncontrived, genuinely original way that is possible to be pulled off. Indeed, the image of the man he was then, forever preserved in the faded, well thumbed photograph, bears uncanny resemblance to the appearance which countless hordes (generally congregated around the Samuel Alexander building by day or Trof of an evening) try so desperately to emulate. 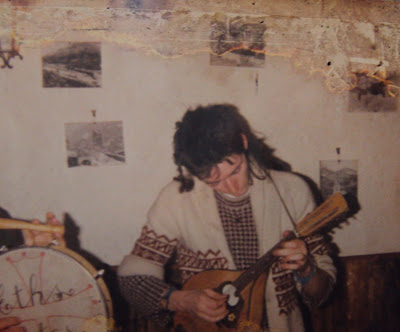 ﻿
The same is true of my mother. Though completely beautiful throughout all eras of her life so far, she looked so innately stylish in her days spent roaming around this dirty old town, twenty years ago. The undercut hair, layered tops, baggy knits, silk ballet pumps and countless trinkets dangling from around her wrists and neck render her student look eerily current and - though teamed with a full head of marginally cleaner, blonde hair and a decidedly more conscious styling effort – bears serious resemblance to my own. 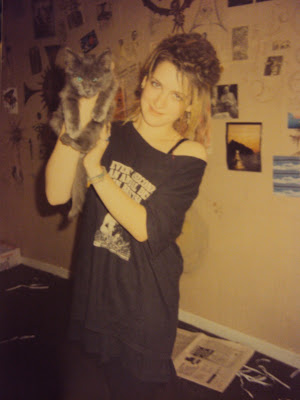 ﻿
I guess what makes my parents (or rather them at aged twenty) true 'unlikely' style icons in my mind was the fact that their “effortless” ensembles were quite literally just that. Their efforts were concentrated instead on relishing their student experience (albeit a very unorthodox one) as opposed to to obsessing over what they should wear to make it clear to others that they were doing so. The innately stylish image they had was neither an obsession or a preoccupation, just cheap, thrown together and bohemian, in its truest essence. I guess therein lies my rebellion: I was at my most impressionable at a time when the word “bohemian” was most commonly attributed to Sienna Miller. It's not my fault, I'm a child of consumer capitalism, not the revolution and for the most part, I'm okay with that. 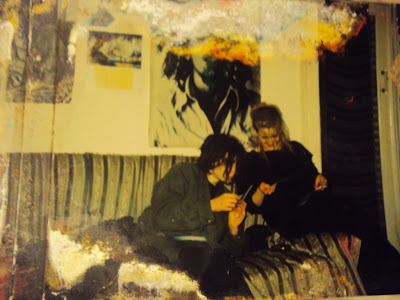 ﻿
In short, my very unusual, charmingly eccentric and mildly insane parents are truly unlikely, style icons, because, even since Laura Ashley, the nineties and an organic farm occurred respectively between them: there was a time, in this place, when they were infinitely and effortlessly cooler than I. 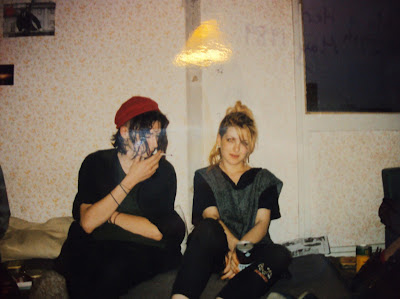 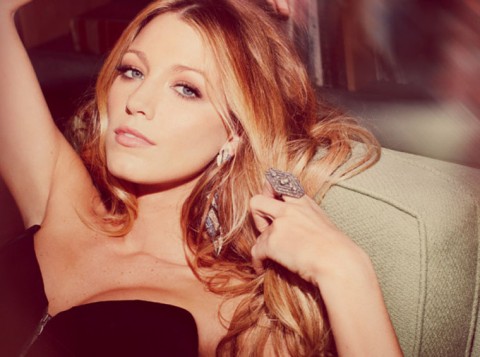 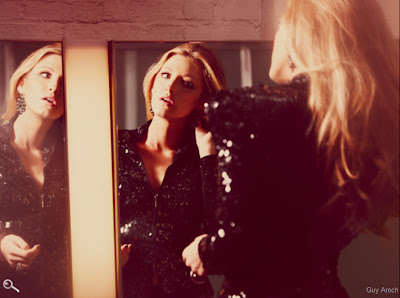 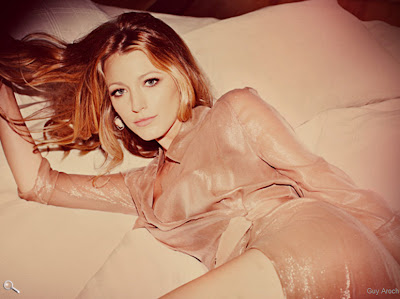 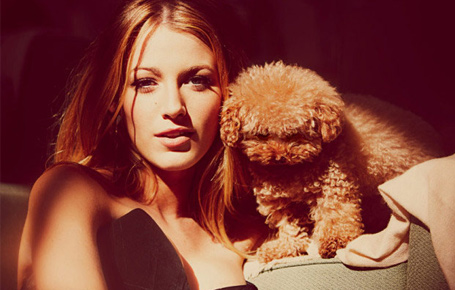 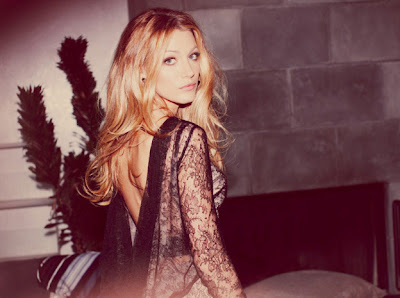 I am now consumed with irrepressible hair/breast/face/jewel/lace/canine envy right now.
Posted by Roisín at 13:38 No comments: 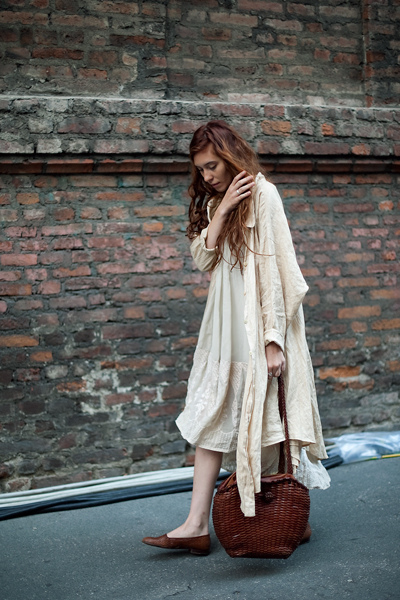 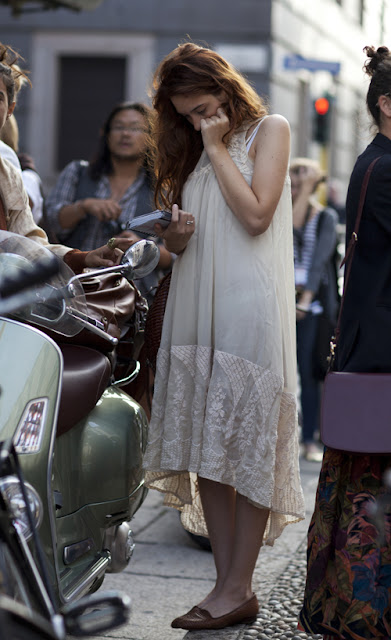 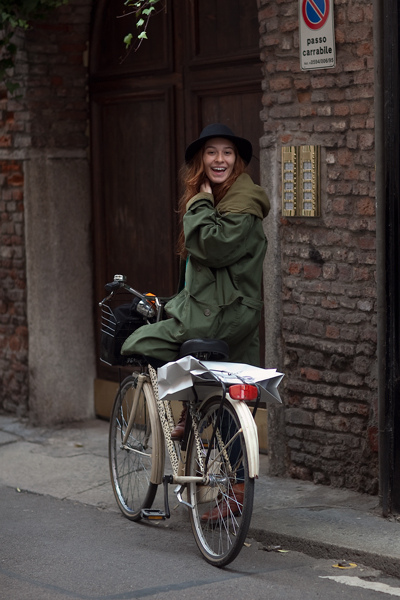 The Italian beauty has been popping up on The Satorialist's blog, among others and for good reason! The stunning cream and rust ensemble exquisitely echoes her striking complexion and that cream, linen(?), maxi shirt is most definitely on my lust-have list. Also, note the perfect execution of the DickHat.
GILLIAN ZINSER 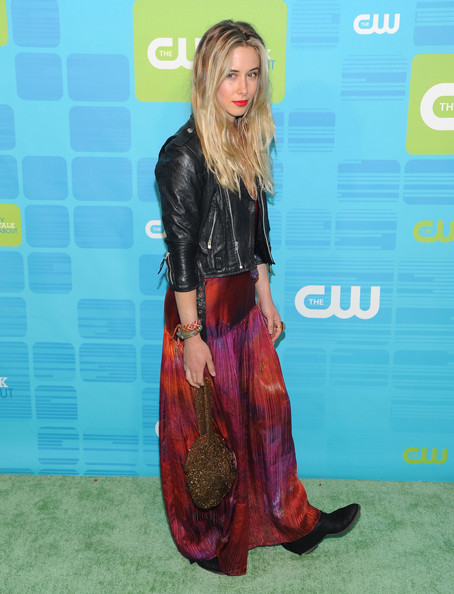 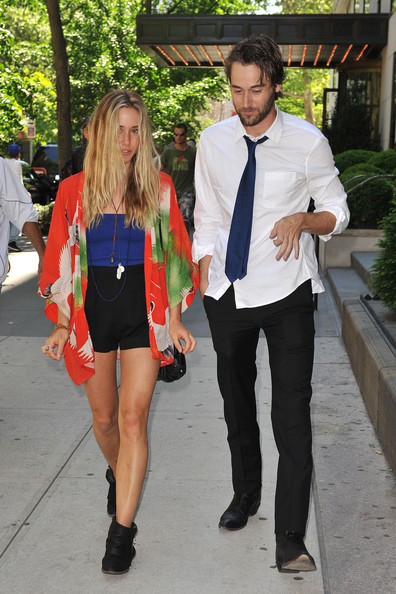 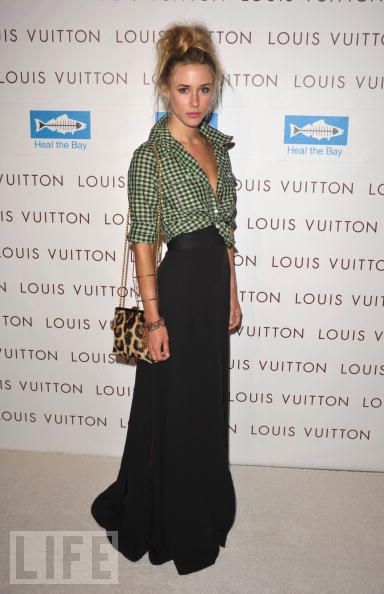 Uncharacteristically sunny and Californ-I-A-clean for my usual taste but a gorgeous girl providing me with some interesting ensmebles nonetheless. She was described as fusing Erin Wasson's off-duty model cool with Sienna Miller's luxe-boho prime.
Posted by Roisín at 02:21 No comments: 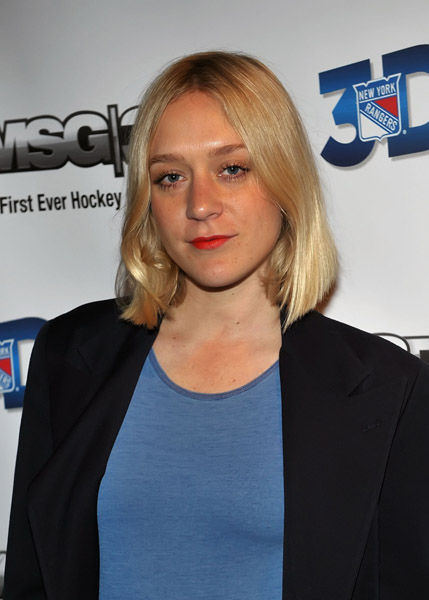 Why, Chloe? I know I'm supposed to think her chop (which has admittedly been present for a good few months now) is so fabulously directional and make me instantly want to lop off my lengthy locks, but in truth, I just didn't get it initially and it hasn't grown on me in the slightest since. 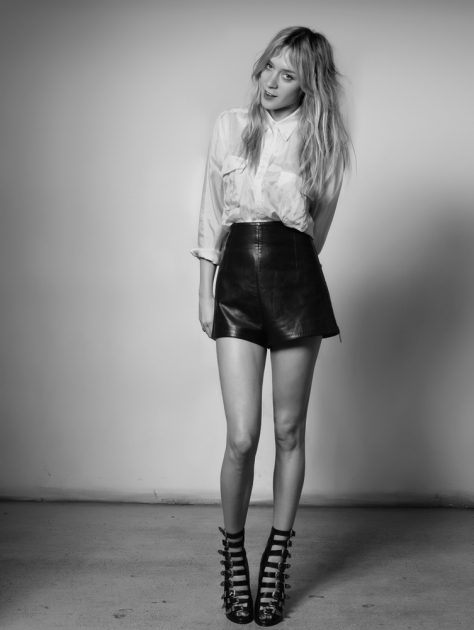 Chloe's appeal: which for me has been unsurpassable since the tender age of fourteen, rests strongly on the fact that she never, ever looks contrived. One never gets the impression that she's worn something to fulfil her 'different' or 'quriky' label; evident in her choice of stunning evening wear, clothes that showcase her superb physique and, until her recent follicle folly, her long, thick and immaculately highlighted mane. 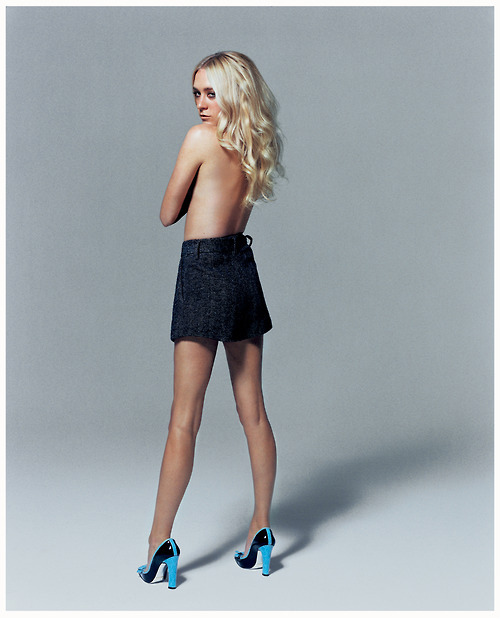 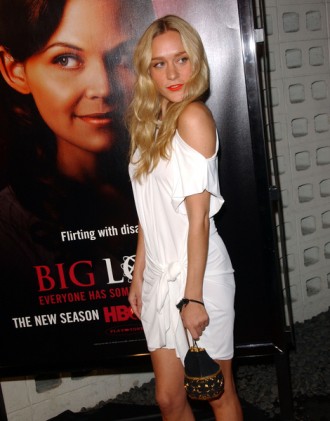 Her putting together of unique ensembles never seemed to be at a detriment to her femininity and it was this innate and elegant way of dressing herself that I think truly makes her such a crucial fashion renegade and a long-standing source of personal inspiration. Anyone can cut their hair in an unflattering style, pile layers of second hand clothing, wear some old boots and claim that this equates to their being 'unique' dressers; but does not a true, innate style icon make. 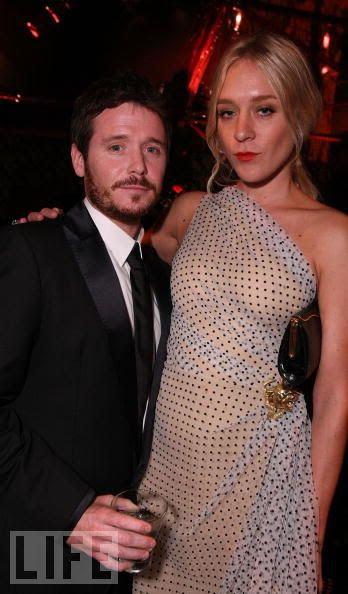 ﻿
So, what of the hair? If Chloe's sense of style is soooo fantastic and original and unique and amazing then why is losing a few inches of her ends such a huge deal? If you've seen her in Kids you'll understand. For one blessed with so much, Ms. Sevigny does not have the most classically pretty of faces and hers is one that benefits hugely from great hair. 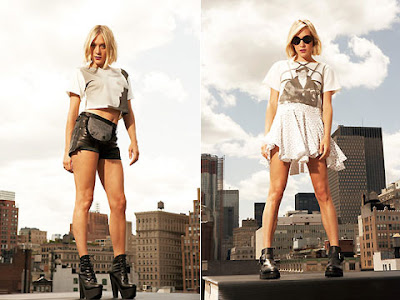 ﻿
Issue of face-flattery aside, the long-line bob on the grounds that it, in my opinion makes Chloe look like she's trying, and therein lies my primary gripe. I haven't seen her look anywhere near as good since and I'm definitely not ready to kiss goodbye to one of my long-standing fashion heroes. 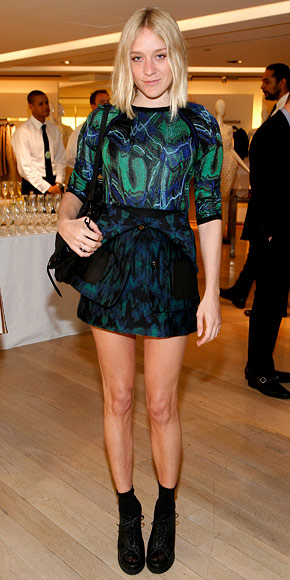 Please Chloe, get regrowing those ends and help me piece together the beautiful illusion I've always held of you, which is now shattering before my very eyes. 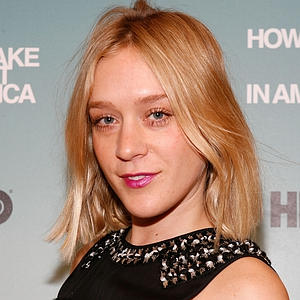